The Economist: World’s most expensive cities

According to The Economist Intelligence Unit’s latest research, for the first time, three cities share the title of the world’s most expensive city.

The 2019 Worldwide Cost of Living Survey compares the price of over 150 items in 133 cities around the world. In the report, three cities share the title namely Paris (France), Singapore and Hong Kong.

The top-ranked locations are largely split between Asia and Europe. In Europe, the usual suspects — Geneva and Zurich, both in Switzerland, as well as Copenhagen in Denmark — join Paris as the world’s most expensive cities. The French capital has been among the top ten most expensive cities since 2003.

“A testament to globalisation”

Roxana Slavcheva, the editor of the survey, commented: “We note converging costs in traditionally more expensive cities like Paris, Singapore, Zurich, Geneva, Copenhagen and Hong Kong. It is a testament to globalisation and the similarity of tastes and shopping patterns. Even in locations where shopping for groceries may be relatively cheaper, utilities or transportation prices drive up the overall cost of living.

The research also noted that the previous sharp fall in the ranking for UK cities, which are now significantly cheaper internationally, has been reversed partially in the latest ranking. The slight appreciation in the pound sterling has been enough to cause increases in domestic prices and push London and Manchester up the ranking by eight and five spots respectively. Nevertheless, London is still 14% cheaper than New York overall. 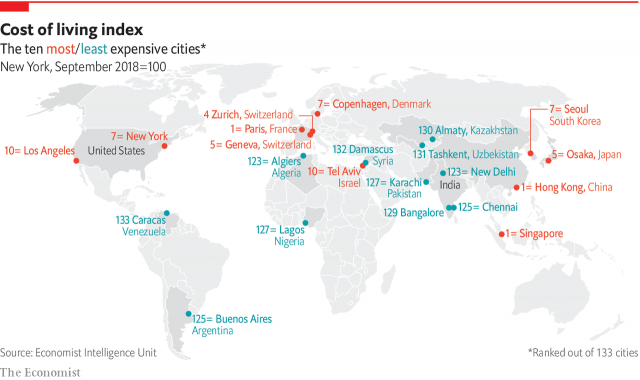 The Economist: World’s most expensive cities