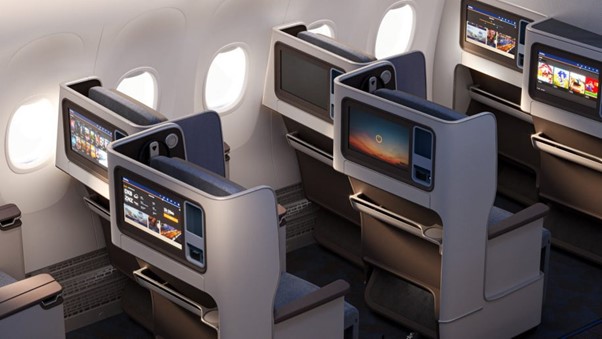 “Here is a sneak preview of something new on our Boeing 737 aircraft,” the airline wrote alongside two photographs of the seat on Facebook and LinkedIn. If you fly Business Class on a future flight to Dubai, you might be among the first to view it when it first opens. If you do, please post a picture of it on our page! :)”

Following the response to LinkedIn, the post reveals that the new seat is currently available on one of the carrier’s recently delivered Boeing 737 Max 8 aircraft.

There were no other specifics provided about the seat product, although it appears to be configured in a slightly staggered pattern based on the photographs provided.

As Sinan Kazzaz, director of programme management (R&D) at Haeco Americas, also commented on the LinkedIn discussion, it appears that the seat was designed by Hong Kong-based HAECO Group. “Beautiful product!” he wrote. I commend the HAECO Americas team for their outstanding effort, and I was honoured to have been a part of it.”

It is unclear whether the seat will be installed just on new aircraft or whether there are plans to retrofit the seat onto any older aircraft.

It was only in 2017 that Flydubai introduced a new business class seat on its B737 Max 8 aircraft, which consisted of ten fully flat seats spread across three rows, including two coveted “throne” seats in the middle row.