Qantas is welcoming customers into the new Qantas London Lounge at Heathrow Airport from today.

Located at London Heathrow Terminal 3, it opens as the airline is counts down to its non-stop 787 Dreamliner flights between London and Australia. 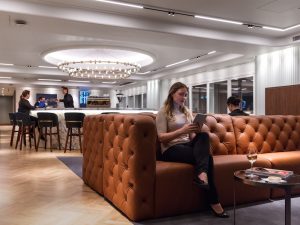 The airline has spent the past 12 months building a dedicated lounge at Heathrow as part of a multi-million dollar investment for customers on its existing London services as well as the London – Perth route starting on 25 March 2018.

Qantas Group CEO Alan Joyce said investing in the first dedicated Qantas Lounge at Heathrow was key as the airline prepares to directly air link Europe and Australia for the first time.

“The Kangaroo Route is at the heart of Qantas’ identity and London is one of our most important destinations. We have worked with leaders in design, food and service to create a lounge that is modern and comfortable and incorporates the aesthetics of the Qantas lounges that make our customers feel at home”, said Joyce.

Key features of the lounge: 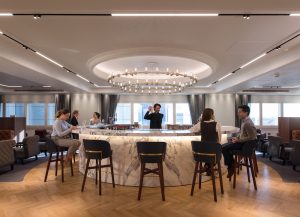 · Seating for more than 230 customers
· Split over two levels with views of the airfield
· Follows the same concept as Qantas’ international premium lounges in Hong Kong, Singapore and Brisbane, with the food and interior design taking inspiration from the local region
· A marble cocktail bar beneath a brass chandelier on the upper level serving cocktails designed by the Qantas Rockpool Mixologists and Australian and European wine and beer
· A gin bar on the lower level offers the finest Australian and British gins, alongside an all-day barista service
· Menus designed by Rockpool with a Sofitel service experience; customers will enjoy á la carte service in the dining room with a selection of plates of the day
· Hot and cold buffets
· ‘Quench’ hydration station with tisane, fruit infused water, sparkling water
· Business facilities including Wi-Fi, flexible work spaces and workstations
· Six shower suites with Aurora Spa amenities 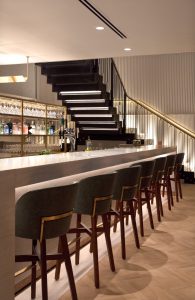 From 25 March 2018, Qantas and Emirates will offer double daily flights between the UK/Europe and Australia with the choice of three hub options. Qantas will offer a daily London to Sydney A380 service via Singapore, a daily Qantas 787 Dreamliner service from London via Perth to Melbourne, as well as daily services from London via Dubai with partner Emirates to Sydney, Melbourne, Perth and Brisbane. The airline recently announced a major cabin upgrade on its fleet of 12 Airbus A380s.

Qantas and Jetstar to stand down 2500 frontline staff