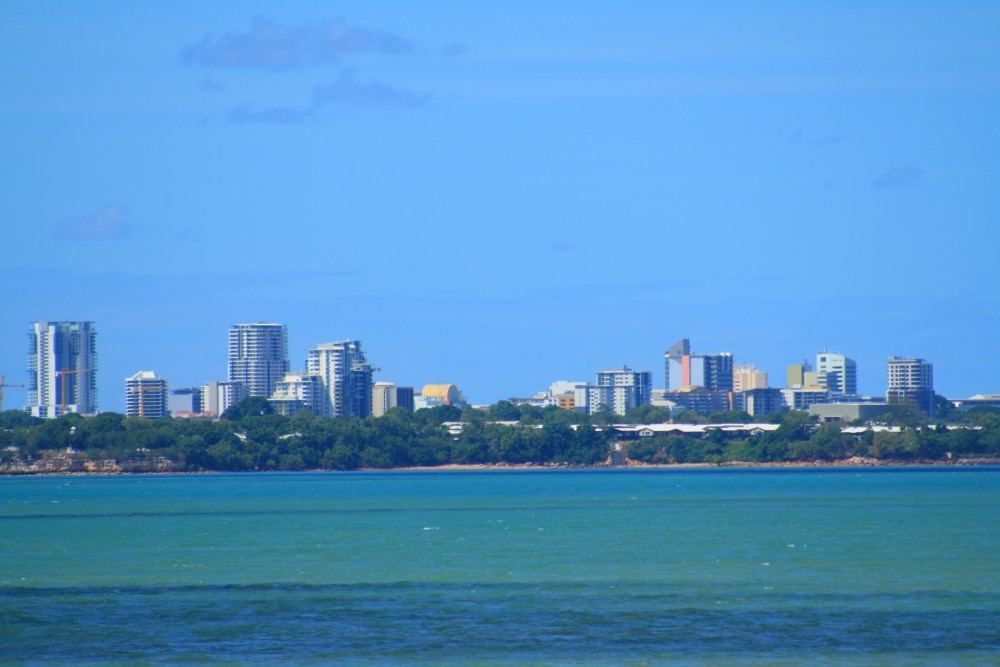 Darwin, the Northern Territory’s Capital City, is named after Charles Darwin, who formulated the Theory of Evolution, so must be one of the few cities in the world to be named after a scientist.  The city is situated on a peninsular, so is surrounded on three sides by water.  Not that one would want to plunge into Darwin Harbour too readily, as they still have a daily crocodile patrol in the waters there just to ensure that the saltwater crocs don’t devour too many tourists.

Yes: crocs, snakes, spiders, Darwin has them all.  The secret to living with them is that if you ignore them, they’ll usually ignore you.  Darwin is a modern city, simply because it has been wiped out twice already – in World War II when the Japanese bombed it, and in 1974 when Cyclone Tracy demolished it.  During the wet season big storms are pretty common around Darwin, although, fortunately, few are as severe as Cyclone Tracy.  But just so you know, Darwin is the lightning capital of the world, and meteorologist flock there to study lightning displays.  If I’m making Darwin sound horrible, I don’t mean to.  Darwin is actually a much laid back place; it’s just different from everywhere else which I, personally, find quite attractive. Okay, it’s also the drinking capital of Australia, based on consumption per head of population, but it is hot and humid in Darwin and a Darwin stubby does go down well after a big day at work.

Two ends to the Top End

Although the Northern Territory is called the Top End, there are actually two ends – the bit up on the coast, where Darwin is, that is lush, green and gets plenty of seasonal rainfall, and the drier desert areas of the south, where the vistas are amazing.  The big town down south is called Alice Springs, which is located on the Todd River.  Each year they have the Todd River Regatta, but one year they had to cancel it because they had water in the river.  Yep! The Regatta is a series of boat races performed by crews in boats with no hulls; the teams just hitch up a boat around their waists and run for the finish line.

Alice Springs is situated in the MacDonnell Ranges, and is close to many other fascinating locations such as gorges, national parks and the Simpson Desert.  Also, the Alice, as the town is known, is a great spot from where to begin your journey to Ayer’s Rock, or Uluru, which is perhaps the world’s most inspiring rock given its remote location and stunning setting.  Uluru is one of those places that is equally interesting seen from afar and when you get very close.  The Rock constantly changes throughout the day as the sun moves across the sky, and if you are ever fortunate to see it when it’s raining you’ll be amazed by the number of amazing waterfalls it generates off its steep sides.

Another tremendous reason to visit the Northern Territory is to visit Kakadu National Park and Arnhem Land, which at 11,000 square kilometres is Australia’s largest national park.  This is where you can really study aboriginal culture, as it has the largest number of rock paintings in the world.  Kakadu is famous also for the variety of its wetlands and the rich flora and fauna that exists here.

The Northern Territory is really a destination to get out and experience.  It’s not the type of place where you sit back in a coach and are shown the place.  When you visit the Territory you’ve got to be prepared to do a bit of walking, or some easy climbing – or enjoy great fishing in remote rivers.  In some ways, a visit to the Territory is a step back in time, but with modern facilities to ease your challenge.

Getting there and about

Getting to NT is easy.  There are plenty of flights from all Australian State Capitals to Alice Springs and Darwin, and from a number of foreign ports. The Northern Territory is a very multicultural place, and Darwin is closer to Indonesia’s Capital, Jakarta, than it is to the Australian Capital, Canberra so there are plenty of flights to and from various places in Asia.  There are many coach tours available of varying durations, some are camping tours, but others offer the luxury of hotel accommodation.  The main roads are good, so it can be easy to drive yourself.  Or, there’s the Ghan, a luxury train that runs several times a week between Darwin and Adelaide in South Australia, and is one of the great train journeys.

The Northern Territory is a great place to just get out and do it.  It’s casual, laid back, but also exciting.  Do yourself a favour, get off your butt, and get to the Top End.

These you must do

Shop and eat at the Mindil Markets

You can only do this in the dry season between May and October, as the Mindil markets are unique and really do represent Darwin’s multiculturalism. The place is jam packed with about 200 food vendors and stall holders which feature a dazzling and delicious range of foods from around the globe and goods ranging from beauty treatments to clothing to arts and crafts, plus there’s entertainment to boot. Grab a drink and sit on Mindil Beach to watch the sunset on a typically magical Darwin evening.

Katherine Gorge is part of Nitmiluk National Park, and is fantastic experience. The duration of the cruise depends on the season for in the dry the river is low, and you have to change boats in order to sail further into the gorge.  In the wet, the river is high and the trip is faster. In any season, Katherine Gorge is spectacular, and there are some fabulous Aboriginal rock paintings to see. There is a very good visitor centre in the park as well.

Australia’s most famous, and certainly most impressive rock (but not the biggest). Uluru, or Ayer’s Rock as it is also known seems like a lonely sentinel sitting alone in a desert. It is a sacred site, so visitors are asked to respect the local beliefs. Uluru changes throughout the day, its colours change with the movement of the sun, its personality seems to change, but it is always awesome. The best time to view Uluru is at sunset, when it puts on an entirely natural light show.

The Alice, as Alice Springs is colloquially known, is probably Australia’s most iconic town. It is the town that is closest to the centre of Australia, which means that it is a very long way from the coast. The colours of the rocks, sand and trees around Alice are astounding, and the town itself is fascinating. Four kilometres from Alice is the reason the town is there, because this where the original telegraph station was established to service the telegraph line that connected Australia to the rest of the world. The station of filled with interesting artefacts, and is a fascinating journey back to the 1870s.

Sit under a waterfall in Litchfield Park

Located about 100 kms southwest of Darwin, Litchfield National Park provides a great oasis from the heat of the Top End. On the way in from the front entrance you can wander through massive magnetic termite mounds which tower over you. Travel further into the park and you encounter a series of impressive waterfalls. Wangi Falls is the most popular swimming hole. The water is warm and clear, and the best part is that it’s an easy swim across to falls where you can just sit and enjoy a fabulous natural massage as the water flows over you.

You can easily get overwhelmed at Kakadu, after all it only covers a measly 20,000 square kilometres. With terrain encompassing wetlands, rivers and sandstone escarpments, it is home to some 2,000 plant species and wildlife from saltwater crocodiles and turtles and an extraordinary variety of birds. Here you can admire Aboriginal rock paintings in their natural setting. One of the best things is to take an early morning Yellow River Cruise to experience Kakadu as it awakens.

Smile at a crocodile

This is the Top End, which is synonymous with crocodiles. That means the saltwater, or estuarine, crocodiles, the giants of the reptile world. When you get up close and personal to a saltie, you have to be impressed. Of course, your interaction with these primitive beasts is quite safe. Whether you view crocodiles leaping very high out of the Adelaide River, or go for a walk above their pens at Crocodylus Park to tantalise them with a chicken dangling above them on a pole, they will both terrify and astound you. You will feel their strength and be amazed at their speed. Then, buy a crocodile burger, just to let them know who is boss.