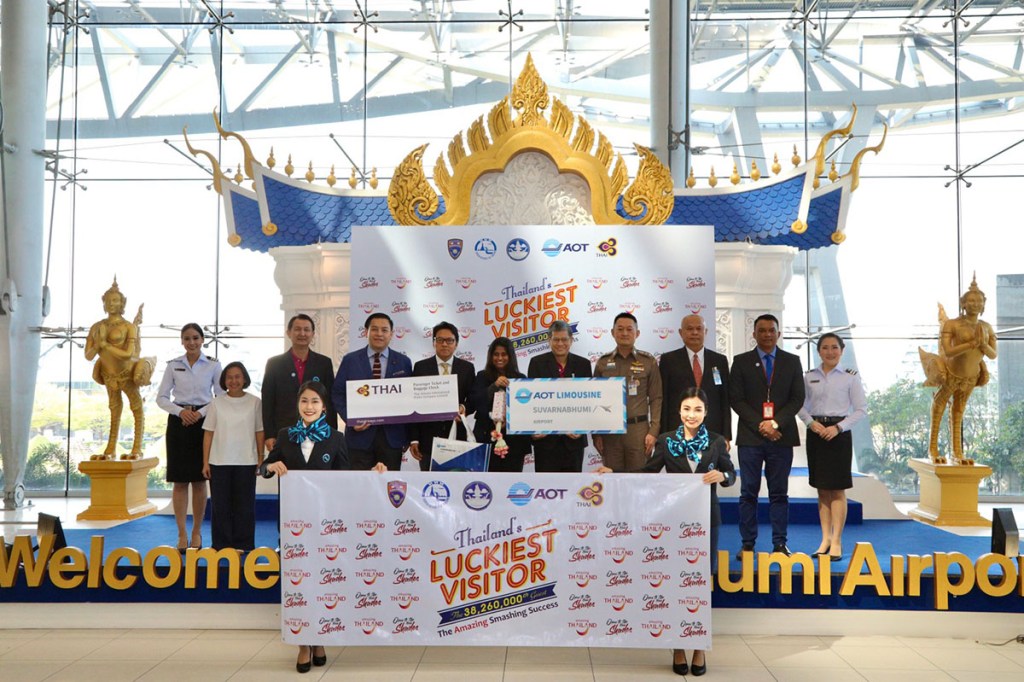 Thailand welcomed its 38.26 millionth tourist to the kingdom, a record high for the country that surpasses last year’s 38.17 million arrivals. Travelling from Mumbai in India, Devanshi Deepak Kesaria along with three friends arrived on Spice Jet flight at Bangkok’s Suvarnabhumi Airport to a pleasant surprise.

The group was traveling to Thailand for the first time, with plans to enjoy travel experiences in Bangkok and Pattaya. After clearing immigration, she was invited to a welcome ceremony and was greeted by senior officials from Thailand’s tourism industry, including the Tourism Authority of Thailand (TAT), Suvarnabhumi Airport, Immigration Bureau and Thai Airways International.

Tanes Petsuwan, deputy governor for marketing communications at TAT said: “Thailand remains the preferred destination among world travellers and has once again achieved a new record high number of arrivals this year with already 38.26 million arrivals as of 20 December. But good news is still to come. We are expected to welcome the 39 millionth tourist on 27 December.”

A ‘Luckiest Visitor’ jacket was presented to Kesariya in addition to a certificate commemorating the occasion, round-trip economy air tickets for two between her original destination and Thailand valid for one year, and a five-night accommodation voucher.

She also received gifts and souvenirs from representatives from Suvarnabhumi Airport, the Thai Tourist Police and Immigration Bureau. She was then whisked away to their hotel in Bangkok in an exclusive airport limousine provided by Thai Airways.

TAT and the public and private sector partners had initiated the ‘Thailand’s Luckiest Visitor, The Amazing Smashing Success’ project in June 2015, starting with welcoming the 13 millionth tourist. The project has since been carried on every year.