Last week saw the hotly anticipated launch of the Waldorf Astoria Bangkok. In order to learn a little more about the opening – probably the biggest in Bangkok this year – I spoke to Daniel Welk, Hilton’s VP of luxury and lifestyle in Asia Pacific, about the hotel’s crown jewel, hidden gems and more.

TD) What was it about Bangkok that Hilton decided that this is the right place to debut the Waldorf Astoria brand in South East Asia?

DW) Bangkok is a city which has everything going for it – it’s vibrant, has enormous global acclaim, and the culinary scene, art and culture here made us think that this is probably the best city we could have chosen to launch the Waldorf Astoria in South East Asia.

Waldorf Astoria today globally has nearly 30 hotels around the world, all of them has a unique since of place, in that desire to provide a related personal service, which ultimately takes those authentic moments that you have in a hotel wither it’s for business, leisure, special occasions and we try to turn them into unforgettable memories.

This is so true of Waldorf Astoria Bangkok, with its striking location overlooking the Royal Bangkok Sports Club making it very special. You can’t rely on reputation alone, so what steps were taken to stand out in a competitive and crowded market like Bangkok?

Well, I think the design of the hotel is extremely important. Every luxury hotel has quite a long gestation period, but we’ve working probably two of the most internationally claim designers in the business at the moment, in André Fu the Hong Kong based designer and the AvroKO studio.

I am sure you will have heard of André Fu, and if you look at the design of the hotel you can see how he has really bought that relaxed luxury concept to what we were trying to doing in the hotel, while still maintaining the iconic nature and history of the Waldorf Astoria brand but really setting out to appeal to the young and dynamic luxury travellers of today.

On the podium of the Waldorf Astoria Bangkok, from the 55th to the 57th floor, we have what we refer to as the crown jewel’ of the hotel. Here we’ve worked with the design concept firm called AvroKO who are renowned for designing some of the most iconic or hottest culinary destinations in the world. We have partnered with them to develop the Bull and Bear grill restaurant. 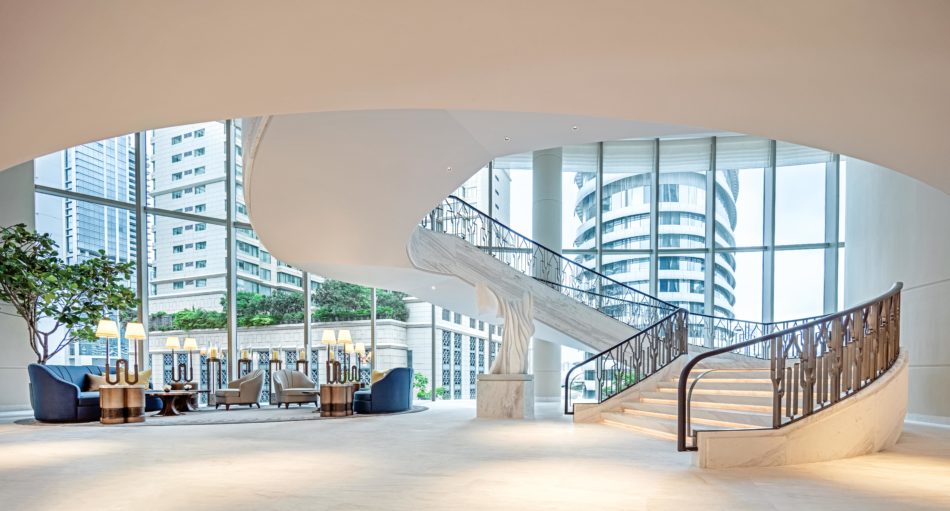 The Bull and Bear is an iconic Waldorf Astoria brand, which originated in Waldorf Astoria in New York, which we’ve bought to Bangkok. The Bull and Bear will cover the 55th floor. From there the spiral staircase takes you up to The Loft, a glamorous, art nouveau New York-inspired bar – and then onto The Champagne Bar, located at the hotel’s peak on level 57.

This is our hidden gem. The design intent is amazing – the bar is hidden behind a wall – you actually just walked past it and you didn’t see it – this is a destination in itself. 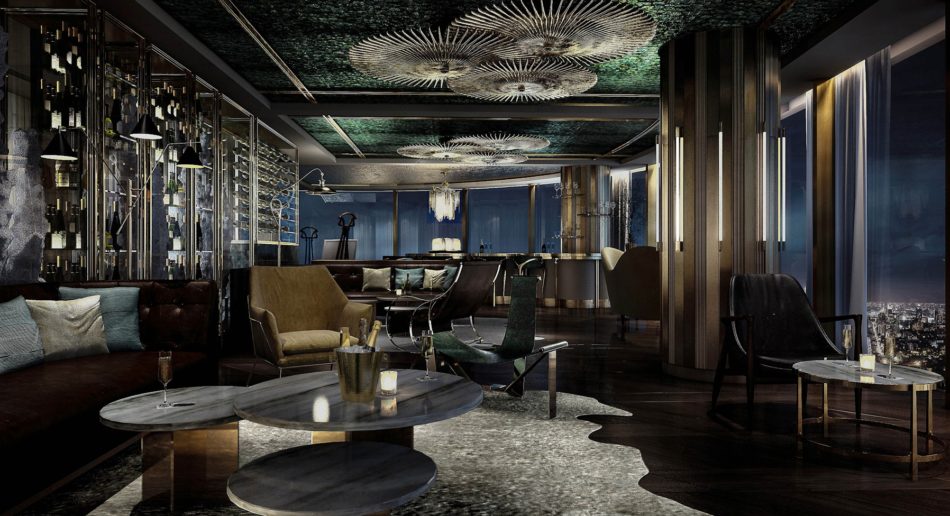 The Front Room is the signature restaurant. Khun Fae [chef Fae Rungthiwa] who has been working in Scandinavia in Europe for the past 10 years in a number of Michelin-star restaurants, she’s bringing her new style of cuisine to Bangkok.

She takes the purity of Thai ingredients and flavors, and — I know this might sound wild and [you’ll think] “what are you talking about, Daniel?” — combines it with Scandinavian cooking techniques, the pickling, the curing, and the food is completely out of this world. When we first started talking to her and trying some of her creations, even as a hospitality professional, I thought ‘wow’ – what this lady is producing is just completely off the charts. So, along with our ‘crown jewel’ the Nordic-Thai fusion found at the Front Room is a big draw and another unique destination [within the Waldorf Astoria Bangkok].

Bangkok is one of the world’s leading cities for meetings and conferences, what have you guys got going MICE wise at Waldorf Astoria Bangkok?

Well, I think for every hotel MICE is extremely important. This hotel has an excellent events base, with eight meeting rooms, including the 730 sqm, eight metre high, Magnolia Ballroom with its beautiful abundance of natural light.

We also have the Junior Ballroom (290 sqm) and an urban space on the ground floor which can welcome approximately 250 people.

So this hotel offers the perfect platform for hosting, wedding, social events, corporate meetings, product launches. Location wise obviously it’s got a great appeal to the local Thai residences — but the event space in the hotel’s been designed with the intent of working with large groups, whether it be weddings, balls, embassy events or conferences.

Click here for more information about the Waldorf Astoria Bangkok and reservations.