Adventure in the heart of the Far North: PONANT opens sales for Arctic 2023 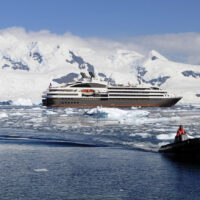 PONANT has launched the sales of its Arctic programme for Summer 2023 that will take guests to wintry destinations of Spitsbergen, Greenland, Iceland, Alaska and the Russian Arctic.

On the programme: discovering the wildlife, sailing among icebergs, volcanoes and glaciers, meeting local peoples, sailing through the legendary Northeast Passage or an adventure into the very heart of America’s Great Lakes. PONANT invites guests to choose from 30 sailings and immerse themselves in the magic of the Far North.

Here are some of the most eye-catching itineraries:

Islands and fjords: from Greenland to Spitsbergen

PONANT invites guests on an exceptional voyage along the east coast of Greenland to the majestic lands of Spitsbergen on this exclusive 13-day cruise. Departing from Reykjavik, this cruise heads for Greenland’s east coast and Ammassalik Island to discover Inuit culture and meet the locals whose lives in this remote region are rooted in tradition.

Aboard Le Boréal, voyage from Norway to Alaska via the Northeast Passage, a legendary maritime route ice-bound for most of the year, and sail on Arctic seas between Siberian archipelagos: a journey of discovery in search of little-known lands and countless natural wonders.

The Russian Arctic: between Wrangel and Chukotka

Embark with PONANT for an unforgettable Expedition Voyage to explore the wonders of the Russian High Arctic. For 13 days, between Russia and Alaska, this is a rare opportunity to sail in the Bering Strait and discover extraordinary landscapes of taiga and tundra dotted with flowers that bloom fleetingly during the Arctic summer.

Explore the west coast of Spitsbergen on this 10-day Expedition Voyage in the heart of the Svalbard archipelago. Aboard Le Boréal, fall under the spell of the Arctic Far North with its ice floes, polar bears and breathtaking glaciers.

Fjords and glaciers of Spitsbergen

An invitation to an exceptional experience, discovering the Far North and vast open spaces of the polar Arctic, its ice floes extending all the way to the North Pole. Departing from Longyearbyen in Norway, an eight-day Expedition Voyage into the heart of Spitsbergen, the largest island in the Svalbard archipelago, awaits guests. On the programme: discovering the flora and fauna with naturalist guides and experts in the polar regions.

Expedition to the Thule Region

A unique PONANT itinerary along Baffin Sea shores with the aim of penetrating the Thule region. A 17-day Expedition Voyage to the ends of the earth, from ice cap to pack ice via glaciers, icebergs and brash, this is an opportunity to sail amidst the Northern Hemisphere’s largest producers of ice.