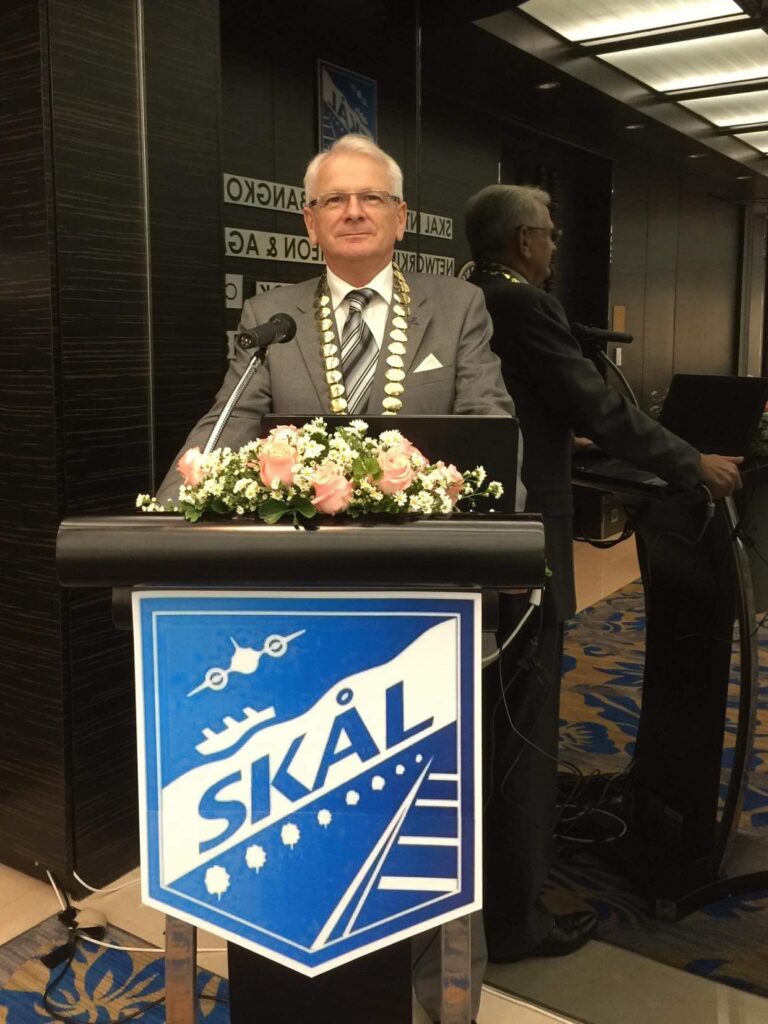 Skål Asia Vice President Andrew J Wood today announced he is to run for election for President in the 2021-2023 Skål Asia elections which takes place virtually on the 25th August 2021.

Wood’s nomination for the head of Skål Asia’s top job comes as no surprise to many, being the longest serving member of the Asia board he is the most senior of the board’s three Vice Presidents.

Wood is a former past president of the Thailand National Committee 2012-14 and is currently President of the Skål Bangkok Club, a post he first held in 2008-10 and again 2018-present.

In 2010 Wood joined the Executive Board of Skål International as a Director. He is a well respected and decorated Skål member and Wood has 29 years of distinguished service. There is no question that Wood has not only the experience and skills to lead Skål Asia, but brings to the table an impressive service record in Skål International, honed over many years.

Wood’s wealth of knowledge and contacts – both inside Skål but equally important also on the global stage of travel and tourism – makes him an ideal candidate. A UK national, with a professional career in hospitality in Thailand, Wood’s adopted home for the past 30 years, has seen this experienced general manager manage some of the country’s finest hotels,  and resorts, including the famed Royal Cliff Group of Hotels. The Royal Cliff  Resort was the host venue of the highly successful 2006 Skål World Congress.

In 2019 the Bangkok Club, under Wood’s leadership, won both the coveted Skål Club of the Year 2018-19 and the Gold Award for growth.

In his preparation for the presidential election Wood has prepared a 12 point road map for Skål Asia which can be found here: https://skalbangkok.com/about-skal/skal-asia/

In response to my questions on leadership, Wood says, “I have always believed that there are those born to lead and those born to be led. My training and experience have given me the skill sets to be an effective leader having risen up the ranks on the Skål Asia board, firstly as a director and most recently as its Vice President.”

He also feels that with the support of its members, he has what it takes to drive the area forward. “With a proven track record at club level I believe I understand what it will take to give each of our 43 clubs in the 17 countries that make up the Asian Area, the support and encouragement for success,” Wood said.

“I would also add that we are here to support all our members. I am saddened when I hear stories of leaders who fail our Asian members and their dreams of going forward and playing bigger roles in our association. We should nurture and promote these aspirations – not squash or deny them,” he explained.

We next turned to his plans and future goals, “In addition to my 12 point roadmap one of my goals will be to continue the SAA board’s good track record over the years of working closely with the EB led by SI President Bill Rheaume. Being a former board director gives me a unique understanding of the workings of our Executive Board and I pledge my support and commitment to their leadership and goals.

“There is no doubt in my mind that we need to invest in our clubs and national committees. We need to empower and finance the grassroots of our association,” he said. “Covid has reeked a terrible toil on our industry and some clubs face financial disruptions never before seen or experienced. It is now time to inject financial aid and reward good governance and to honour our pledges and to be honest in our deeds and virtues. Also much of the future of travel and tourism is linked digitally and we need to help all our clubs in Asia to be making the most of online marketing, communications and business opportunities,” he added.

Wood also feels that more can be done to support and encourage the 6 Asia members of Skål’s powerful International Council. A former Councillor himself, (2006-2010) he feels that by working together the Asia International Councillors should elect a spokesperson to ensure that the goals and aspirations of the Asian Area are being met and actively pursued. The influential council is important and should be fully supported and encouraged.

Wood believes experience and contacts are very important tools for any leader. “I believe I am the best equipped candidate that has grown with Asia during its most formative years (under Presidents Earl Wieman, Gerry Perez and the late Marco Battistotti). This included a time when we helped both Singapore and India to rejoin Asia. No-one better understands what we need to do to prepare for the future, a very different world – post Covid, ” he added

With more than 2500 members here in Asia representing 1 in 5 of all Skål Members worldwide, we need to be strongly represented and have a voice. Asia has often led the way with global growth and savvy commercial acumen, Asia is constantly driven by the need to adopt, adapt and change. So too must Skål Asia, there is no reason we cannot.

In closing Wood said that it is auspicious that the Skål Asia election falls in August. He first joined Skål on the 20th August 1992. In a new world where borders and travel are restricted he says his energy and enthusiasm, rather than diminishing, shows no bounds.

“I am ready to take my beloved SKÅL on its continuing journey of Asian friendship and amicale,” he concluded.

Travel and Tourism – 12 predictions of our future

COVID-19: Communicating The Best Advice In The World