Expedia Group has revealed the latest hotel demand trends to Thailand, showing a steady growth which increased by 10% over the past 12 months.

According to Expedia Group’s data, Thai accommodation partners have been enjoying an increased growth in the overall inbound demand to Thailand. Based on its extensive portfolio of travel brands, the US remains the largest market to Thailand with demand growing by 20% year-on-year. Additionally, China is now the second largest market, surpassing Japan, Hong Kong and South Korea for the first time in the past couple of years. 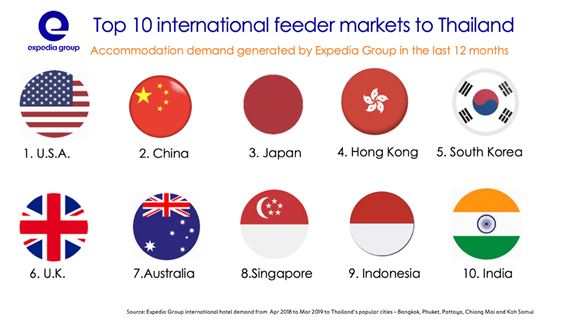 The most popular destinations are Bangkok, Phuket and Pattaya, while Hua Hin (110% YoY), Koh Phi Phi (100% YoY) and Koh Lipe (100% YoY) emerge as the rising markets with triple-digit demand increase during the same period.

“Contributing to the country’s grand scheme of tourism growth”

“We are pleased to see Expedia Group is contributing to the country’s grand scheme of tourism growth,” said Pimpawee Nopakitgumjorn, director, market management at Expedia Group.

“Accommodation players who look to build a strong base of international customers should consider our unique package offerings, as we know international package bookers coming to Thailand typically, stay half-day longer, pay 10% more on accommodation and 50% less likely to cancel their bookings, compared to those who booked standalone deals.”

The data also uncovered that Chinese travellers are the driving force behind the strong demand for packages into Thailand — almost one in three international Package bookings were made by Chinese.

China is also the fastest growing market for packages as demand skyrocketed by 200% YoY. India is trending in the same direction, with package demand up by 160% YoY. Other markets tracking triple-digit growth in package demand include Ireland (130% YoY), South Korea (120% YoY) and Indonesia (100% YoY).

8 in 10 consumers make travel choices based on representation in travel advertising,…