G Adventures has used its data and combined it with topical world events to forecast the hottest spots to travel in 2018.

From destinations on the rebound, to places where events and investments are making it more exciting or accessible to visit, the adventure operator’s top 10 destinations are as follows:

EGYPT – 2018 is poised to be an exciting year for the country as its new Grand Egyptian Museum prepares to open in late-2018 as the world’s largest archaeological museum. The attraction is expected to get a lot of attention, which will hopefully contribute to Egypt’s tourism comeback. The country’s tourism revenues jumped by 170% in the first half of 2017, while G Adventures’ bookings grew 24%.

SRI LANKA –  The country aims to double the number of tourists to five million by 2020 as part of its development strategy. G Adventures has seen a tripling of global demand for tours booked to Sri Lanka in the past year.

RUSSIA – The world’s largest country will be in the media spotlight in 2018 as it plays host to the 2018 FIFA World Cup.

The Russian Embassy is waiving visa fees to fans attending the World Cup. The operator has experienced 57% growth in the past two years. New for 2018 is is the Backroads of Russia tour, priced from £1,549pp for a 12-day trip from St Petersburg to Moscow, with departures from May 2018.

COLOMBIA – A high-profile 12-year peace treaty, a Nobel Peace Prize for its president, and national investments in marketing the country overseas, have all combined to boost Colombia’s reputation as a place to visit. Inbound tourism has increased more than 250% in the past 10 years, outpacing tourism to all other South American countries.

G Adventures’ Colombia bookings have grown 232% in the past two years, and early-2018 sees the company launch a new exit route with the indigenous Wiwa people on the still relatively unknown Lost City trail. Priced from £499pp for a seven-day Lost City Trekking trip. 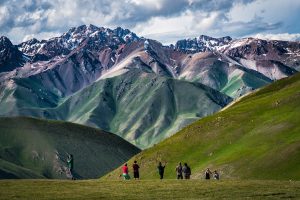 KYRGYZSTAN – Kyrgyzstan is benefitting from investment in tourism by the U.S. Agency for International Development (USAID). The focus is on immersive culinary experiences and active trips, with more than 2,500km of newly marked treks being developed throughout the country. 2018 will also see Kyrgyzstan host 40 nations in the biennial World Nomad Games, a championship of traditional nomadic sports and culture.

A nine-day trip Best of Kazakhstan and Kyrgyzstan trip is priced from £749pp.

PORTUGAL – The 2018 hosts of Eurovision have had a record-breaking year in 2017 as travellers seek affordable European destinations with fewer crowds, quality food and wine, and perceived security.

MOROCCO – Foreign tourist arrivals to the Morocco rose more than 13% during the first 8 months of 2017 versus the same period in 2016, bringing eight million visitors. The opening of the new Yves Saint Laurent museum in October this year has also helped propel publicity for Marrakech, one of the country’s main hubs. A 15-day Highlights of Morocco trip is priced from £949pp.

HAWAII – The Hawaii Tourism Authority is granting US$3.5m to local community tourism and conservation groups in 2018 to promote the Pacific Island state’s cultural and natural heritage, and to set the islands up as leaders in sustainable tourism. For the first time, G Adventures will offer travellers the opportunity to explore Maui, Oahu and Kauai in 2018.

BOLIVIA – With its new US$150 million, 119-mile Tupiza-Atocha-Uyuni highway set to open in mid-2018, connecting the Eastern and Western ranges of the Bolivian Andes, travel to and from the famed salt flats will become more accessible.

OMAN – G Adventures added Oman to its lineup for 2018 after seeing an increase in demand for trips to the Middle East with 36% growth in bookings to the region between 2016-2017. Its new eight-day Highlights of Oman tour is priced from £1,499pp with departures starting in September.

Revenge travel is out, reconnection travel is in: Top 10 travel trends for 2022…

How G Adventures and Hostelworld are changing face of youth travel