For decades, the lure of tax-free gold and cheap flights made the Emirates,  particularly Dubai, a hot favourite with Indians. While the stringent norms in Middle East, safety concerns and the rise of low-budget family destinations in South east Asia dented this popularity to some extent, a Colliers International research states: “tourist arrivals from India into the GCC have witnessed constant progression year on year”.

Encouraged by its pace-setting 7% GDP growth, India is now the fastest growing outbound travel market in the world, second only to China. The United Nations World Tourism Organization (UNWTO) estimates that India will account for over 50 million outbound tourists by 2022, making India a USD 45 billion outbound spend market.

Despite the slowdown due to Indian Rupee fluctuations, the Indian outbound market has been growing at an average annual growth rate of 10-12% over the last seven years.

To put things into perspective, India has been the largest source market for Dubai for the past three years. Overall in 2017, UAE welcomed 2.3 million Indian tourists, accounting for 13% of its annual visitors. This is 15% greater than that of UAE’s second largest source market, Kingdom of Saudi Arabia, popular for the Hajj pilgrimage.

“37% of India’s outbound market travels to the GCC”

Why is India’s outbound market growing?

By 2025 India will rank as the world’s youngest country demographically with 65% of the total population categorized as Gen X and Gen Y, according to Census of India, Ministry of Home Affairs, India, 2018 figures. Add to that the bourgeoisie middle class (350 million), with an increasing amount of disposable income and far greater amounts of aspiration to travel.

According to Forbes, Indian tourists are among the world’s highest spenders per visit made abroad. An average Indian traveller spends USD 1,200 per visit compared with Americans and British travellers who spend on average USD 700 and USD 500 respectively.

The GCC 2018 report by Colliers said: “37% of India’s outbound market travels to the GCC. The popularity of this region as a destination for business, place of work and leisure underpins this demand”. 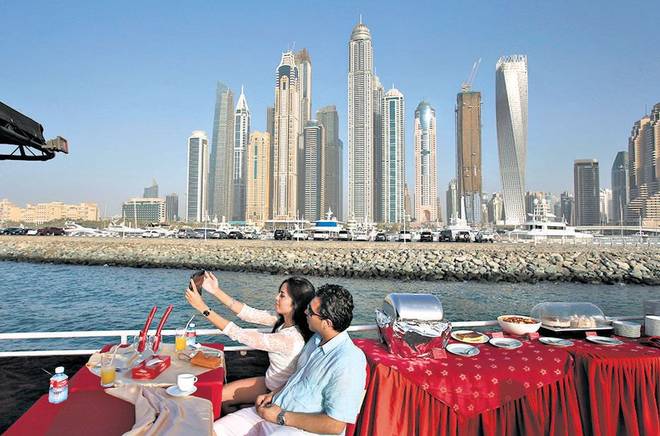 How can GCC countries reap the benefits of this growth?

Amidst the economic and political infighting in the Middle East, the Indian tourists can add some much needed relief to glitzy malls running dry. In the recent past, several GCC countries have relaxed the visa norms. Indian passport holders with a green card or valid US visa are eligible for Visa on Arrival in UAE valid for 14 days (can be extended). UAE also introduced a free two-day transit visa.

Saudi Arabia announced the launch of their tourist visas as a strategic part of National Transformation Program 2020 and Saudi Vision 2030. It is hoped to boost overall current tourism numbers (leisure tourism) and increase Indian footfall specifically. Bahrain also jumped onto the bandwagon with e-visa for Indian passport holders thus eradicating the need to visit the embassy and make the process a lot more seamless.

To attract Indian travellers to the GCC region and to profit from the largest source market, hoteliers require to focus on the average Indian travellers’ needs. They prefer to stay at midscale hotels, prioritize their spending on experiencing and exploring the key attractions — as well as on good quality food and beverage. Hence, packages curated to these needs will help hotels attract more Indian travellers.

When one thinks of India, large family structures (not too unlike Asian) come to mind. Owing to the family and friend centric decision making culture, Indian tourists typically travel in groups. Offering family friendly amenities and facilities to Indian travellers will attract their attention.

Colliers estimates that an extra 10.8m room-nights will be created by increased
demand from Indian tourists to the GCC in the next five years.

With an inbound tourism market as large as India in its neighbourhood, this is the time for Middle East to get its act right and make hay while the sun shines.