IHG has announced an agreement with GS Star for 15 avid hotels to open in Germany over the next five years.

The deal was signed 9 October 2018 at EXPO Real in Munich between IHG and GS Star.

Commenting at the signing ceremony is Kenneth Macpherson, IHG’s chief executive officer, Europe, Middle East, Asia and Africa: “avid hotels has seen strong signings in the U.S., Canada and Mexico making it IHG’s most successful new brand launch since Holiday Inn Express back in 1990. We are now excited to bring avid hotels to Germany where our proactive development approach has delivered exceptional growth in recent years.” 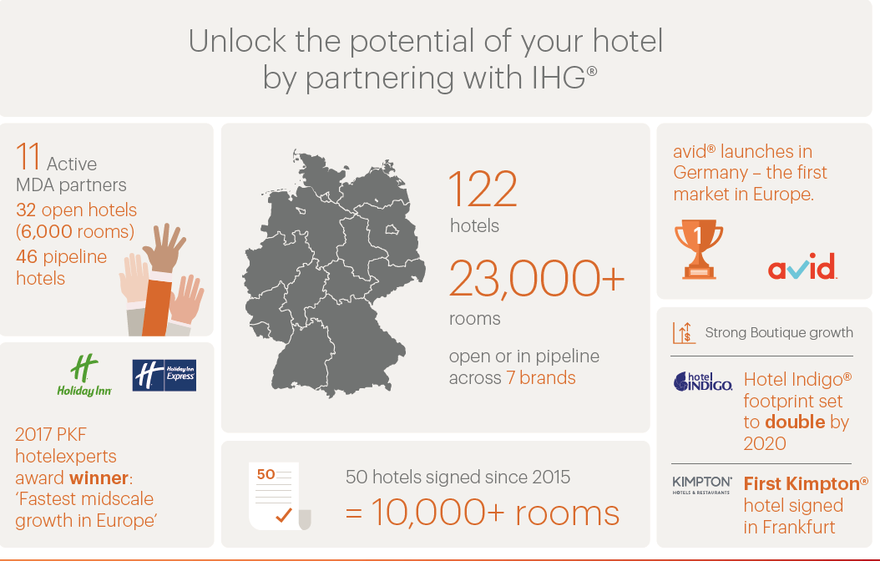 Germany is a key market for IHG with 122 hotels already open or in the development pipeline. The group is now seeking to build further on this hotel growth momentum with the ambition for avid hotels to become one of their biggest brands in the country.

Under the structure of the MDA, hotels will be signed within three years and opened within five. The first new-build avid hotel is planned to open by 2020.

“The potential to be a strong mainstream growth vehicle”

Andreas Erben, CEO and head of development at GS Star commented: “We are delighted to be the first to market in Europe with this new brand from IHG, which has the potential to be a strong mainstream growth vehicle. It is a compelling guest offer, removing the frustrations of everyday travel. Attractive development costs matched with an efficient operating model will support the quick growth of the concept in major Germany cities.”

avid hotels, which was officially launched last year, has already received strong owner interest in the U.S., Canada and Mexico with 130 signings.