Switzerland, because of its mountainous landscape and magnificent lakes, is renowned for its attractive and amazingly-engineered railway lines, some of which are so steep they seem to defy gravity.  One train that has a grand reputation for its great beauty and eye-popping gradients is the Bernina Express. 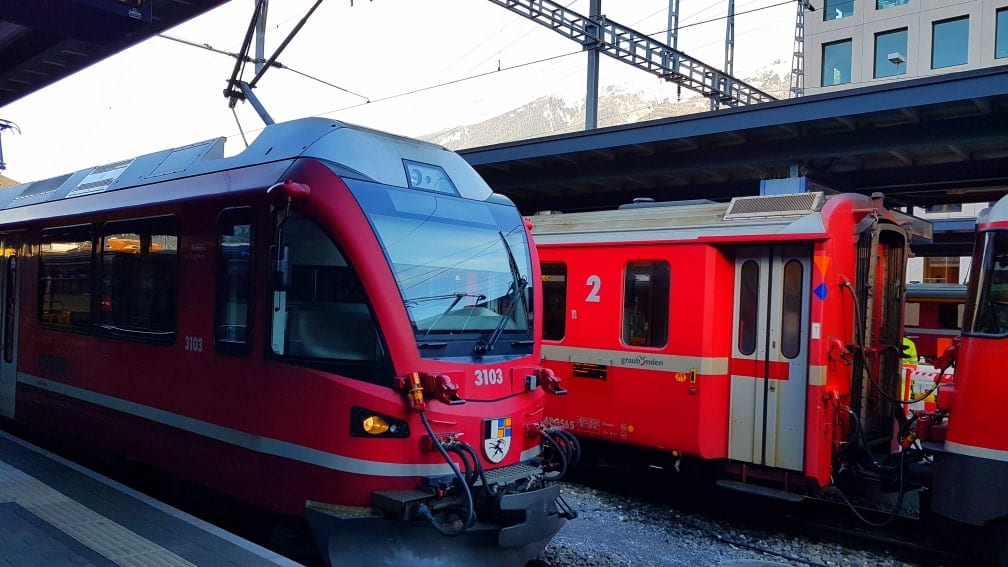 This is a well-named panoramic train, which runs between Switzerland’s oldest city, Chur and the Italian town of Tirano.  The Bernina Express runs along a one-metre narrow gauge railway that is over a century old.  It was originally built to exist in harmony with the surrounding countryside, a decision which meant that some very intricate engineering decisions had to be mastered in order to complete the line.

Many of the principles which were incorporated in the line served as the template for other complicated railways in Switzerland and elsewhere.  In the Bernina area, the railway is quite unique, being the highest altitude transalpine railway and one of the steepest adhesion railways in the world.

The Bernina Express is a four-hour journey via an impressive piece of railway engineering: the train reaches an altitude of 2253 m. It requires lots of spiral loops, 55 tunnels and 196 bridges to accomplish this.

The landscape varies greatly, from high alpine scenery on the Bernina Pass to Mediterranean scenery in the Poschiavo valley to Tirano.

The railway passes through the Albula Valley.  An amazing journey, it passes across many viaducts.  Some of these are utterly spectacular, such as the Solis Viaduct, which is made from limestone and has eleven arches.  Built in 1902 it is 89 metres high, 164 metres long, and has a main span of 42 metres.

A viaduct with a very tight turn is the Landwasser Viaduct, which can be seen long before you actually cross it.  This viaduct has six arch spans 20 metres in width which rest on five high pillars. You approach via a steep gradient and once on the viaduct traverse a circular arc with a radius of just 100 metres. The south eastern abutment of the viaduct is located on a high cliff, and at that point, the tracks lead directly into the 216 metres-long Landwasser Tunnel.

The Albula tunnel leads to the high Upper Engadine valley, where Pontresina is one of the prominent towns. This valley sits at such a high altitude that its climate is considerably different from climates in other Swiss valleys. You will not see many deciduous trees here. It’s a fantastic winter sports region.

In the high Alps

The Lago Bianco (White Lake) will come into sight, and soon after the Bernina Express will reach the small station of Ospizio Bernina. This marks the highest point of the route, at 2253 m over sea level.

I did this journey in May, when there was still plenty of snow around, and long icicles hanging from the station eaves, making it a most magical place.

The most audacious engineering is on the section between Bergün and Preda. In order to overcome the height difference of 417m between the towns, in a distance of only 6.5 km the route is extended for 12km by a series of stunning engineering structures which includes a series of spiral tunnels and a couple of curved tunnels and viaducts to provide one of the most fascinating rail journeys in the world.

The scenery, in any season, is glorious, and the railway is considered to be so unique that, and the surrounding countryside, has been declared a UNESCO World Heritage Site so that it can be preserved for future generations to enjoy.