Kerala is located on the south west corner of India and the city of Cochin, or Kochi, as it is also called, is located on a peninsula bordering the Laccadive Sea, which is part of the Arabian Sea.

Fort Cochin, a suburb of Kochi, this situated on the southern shore of the entrance to Cochin Harbour. 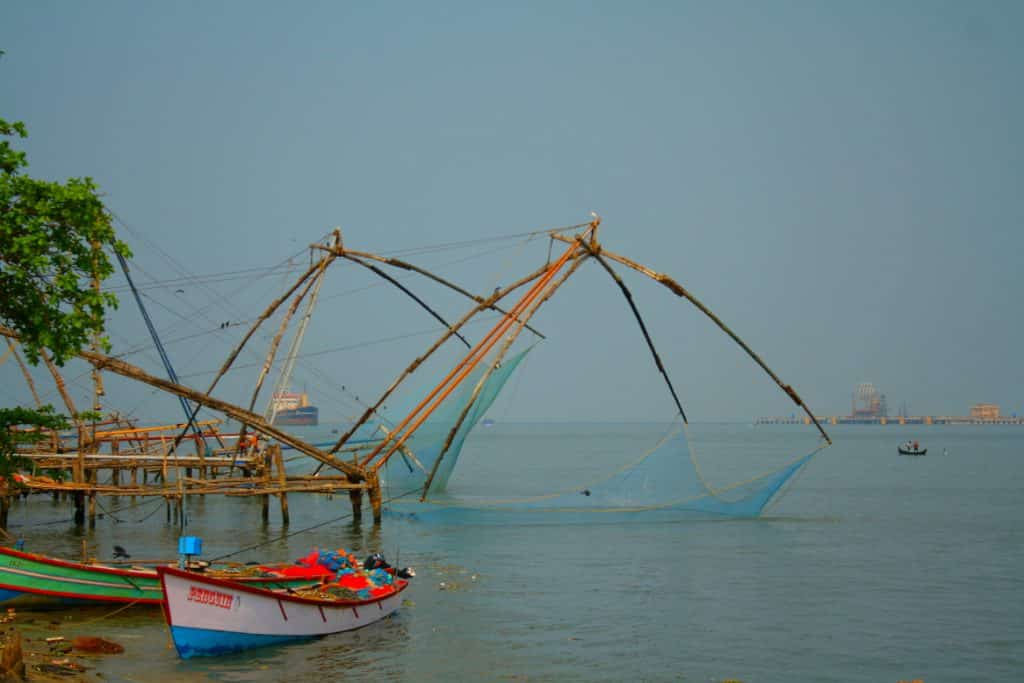 A really charming town, Fort Kochi has an interesting European history which harks back to the Portuguese explorer Vasco Da Gama who established a settlement here in 1502.

The house that he lived in is still standing, and is now a guest house, and the church where he was buried for a time is still there.

The streets are narrow, and many of the houses are whitewashed, but they have a certain charm about them.

A bit of Europe in India

Fort Kochi feels more European than Indian, a direct result of its history.

After the Portuguese lost their influence, the Dutch moved in for a time, then the British took over.

All of these colonists left their marks, particularly as their various religious beliefs have lived on, so that Fort Kochi, has a wealth of churches of many Christian denominations.

Roman Catholicism seems to be the main religion, but there are also Protestant churches, as well as both Coptic and Orthodox places of worship.

As well, there is a Jewish neighbourhood. Hindu and Muslim temples and mosques are commonly seen, as are a smattering of other religions too. Fort Kochi is a true melting pot of beliefs.

One of the main attractions in Fort Cochin is the plethora of Chinese fishing nets, all of which attest to Chinese influence in past times.  These are outrageously large nets that are built on the shore, but which have three long cantilevered wooden arms which hold an enormous net that is lowered into the waters.  Several men are required to lift these monstrosities out of the water, but it does seem to be a very inefficient way to catch fish.

As I watched them, there seemed to be a lot of effort for a minute gain.

I have seen these types of nets before on Hainan Island in China, where they are erected in deeper, and certainly cleaner, water, where they seem to catch much bigger fish.

Unfortunately, the area around the nets is full of rubbish, and the aromas of stale fish combined with raw sewerage does not encourage one to stay long.

I asked a local about the large amount of rubbish that is strewn virtually everywhere and was told, “Well, if I didn’t drop it, why should I pick it up?” An attitude I found to be unconvincing.

That’s not to say that Fort Kochi doesn’t have charm. The town doesn’t seem to have the masses of humanity you find in other parts of India.

Kerala had India’s first democratically elected Communist government, so it seems to have more facilities, particularly health and education, than most other places in India.

It is interesting to wander around the town, which is full of narrow streets filled with western-style colonial houses, to enjoy its historical perspective.

You could even take a tuktuk to drive, precariously, through the narrow streets.  You don’t even have to search for them as the tuktuk drivers will approach you to offer rides for outlandish prices – but this is wishful thinking as they can be bartered down to a more realistic price quite easily.

I thoroughly enjoyed hairing around Fort Kochi, gripping on for dear life in a tuktuk, it is an exciting adventure, particularly given that if India does indeed have traffic rules, no one seems to obey them.

For longer journeys I opted to hire a cab, and was lucky to encounter a driver who was both excellent, and fairly priced, so I engaged him to carry me around for a few days.

This experience I really enjoyed because his vehicle was the traditional Indian-made taxi, a Hindustan Ambassador, which is a copy of the Morris Oxford which was built in the 1950s. The cab was roomy and very comfortable. My driver was brilliant and very knowledgeable about the places he took me to.

It is interesting to discover different parts of the township, to stop at the historic churches or to browse the shops. One great adventure was to cross the harbour on a local car ferry. The bedlam of trying to fit too many vehicles on the ferry, only to experience hundreds of pedestrians jam themselves between the vehicles was a real hoot.

Fort Cochin in Kerala is a good place in which to introduce yourself to the assault on all senses that is India. Because of its history as a European enclave, its high percentage of Christians, and, seemingly little in-your-face poverty, it is not as overwhelming as other parts of India. There are even some good beaches there, and the people were both charming and friendly.