My wife and I spent our 40th anniversary in Hue Vietnam, and it was great decision to visit.

I must admit that my first knowledge of Hue, the former capital of Vietnam, was when I saw the Stanley Kubrick film Full Metal Jacket in which the final battle scene takes place in Hue and the whole town seemed to be destroyed.  The fact that those scenes were actually filmed in London should have given me a clue that the real Hue (pronounced “Way”) is nothing like how it was shown. 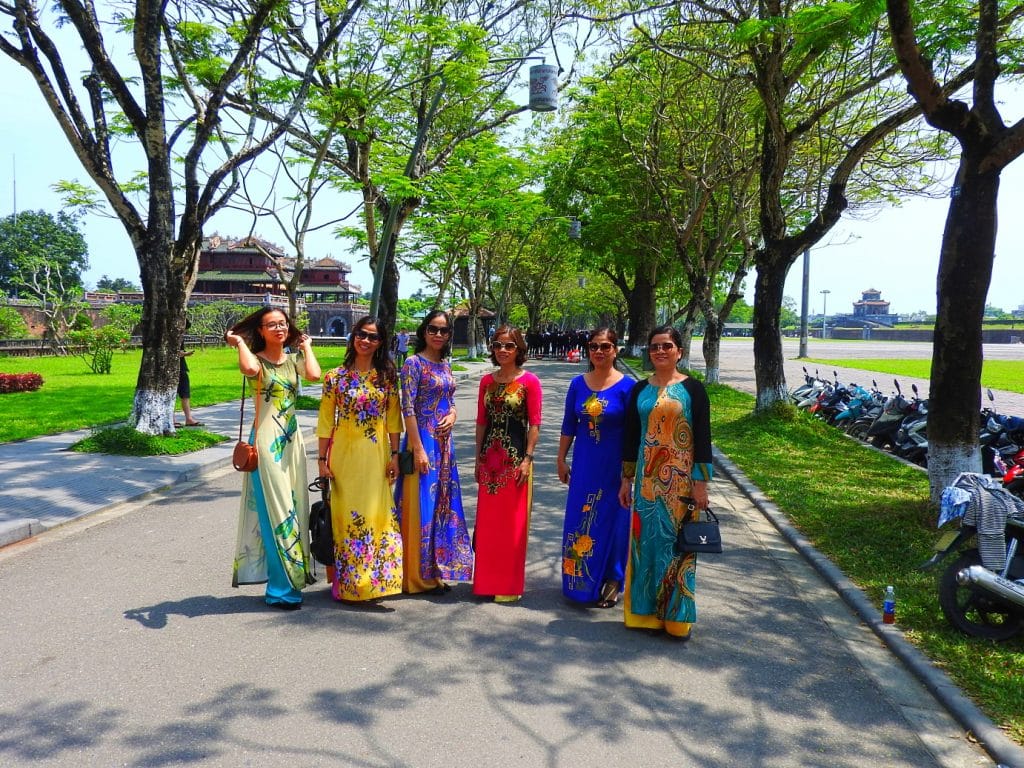 There was a fair amount of damage done to Hue during the Vietnam War, but many of those damaged historic buildings have been restored, and today Hue is a fascinating place to visit because of the magnificent architecture that is on display there.

Hue Vietnam is strategically located on the banks of the Perfume River, near the coast almost midway between Hanoi and Ho Chi Minh City.

Whilst the Perfume River certainly doesn’t smell like Chanel No. 5, it does seem to be very clean. Our boat trip down the river certainly didn’t assail our olfactory senses at all.

It was Vietnam’s capital during Nguyen Dynasty which lasted from the 17th century until 1945 when a communist government was established and the seat of power was moved north to Hanoi.

As the former royal capital there is much to see in Hue, chief among which is the Royal Citadel which is a vast complex of palaces, temples, moats and pavilions. There’s a lot of walking and it does take quite some time to fully explore just by ambling along.

The Citadel was both a place of impressive royal ceremonies and of mass murder under the Viet Cong who threw 3,000 citizens to their deaths over a nearby cliff face.

Another of the attractions is the Emperors’ Tombs.   These are located to the south in an area called Kim Son and one of the more interesting ways to see them is from the Perfume River.   It is easy to pick up a cruise, plus you can get to the tombs by road if you wish to have a quicker trip.  The tombs span a distance of 13 kilometres, with some being more elaborate than others.  The most extravagant is the Tomb of Minh Mang which covers several hectares and which features several lakes and beautifully wooded areas.

The Tomb of Tu Duc is also very serene as the Emperor used for his own recreating as well as for his resting place.  It do also has a lovely lake and gardens, but many of the buildings have fallen into disrepair.

There are several hot springs near Hue, which many visit because of their reputed health benefits.  Nevertheless, it is still refreshing to swim or soak in the hot springs which provide a restful break from touring.

It’s also easy walking on the southern side of the river where the bulk of hotels and restaurants are situated. Some of the streets are closed to traffic after dark, so the most popular streets become malls where the hardest decision is where to dine?

A good meal does not break the bank here. We found some quite good restaurants, some with a French influence, where we sat, ate delightful food and just people watched, which was a wonderful to end the day.

Hue is a delightful city, which certainly doesn’t appear to be as congested as other major cities in Vietnam. In fact, despite the fact that we were staying in the tourist area, we found Hue to be quite serene.

There is a lovely river walk between the Citadel and the Thien Mu Pagoda, which is a 7th century seven-storey Buddhist temple that boasts some lovely gardens, and great views over the river.

Many of the local women wear the traditional Ao Dai, a split tunic dress made from colourful fabric that is worn over trousers, for their walk.  They look beautifully graceful as they amble along in groups, enjoying their day out.

We hired a boat for a sunset sail along the Perfume River. A small family lived aboard the vessel, a young couple and their baby. They were very obliging and made our cruise feel so special, as they did make us feel at home. The cruise was very interesting as the river is quite wide with lots of water traffic passing by. Watching the sun bid farewell as it slipped below the horizon on our final night in Hue, was the perfect way to end the day.