Java is an island of Indonesia, bordered by the Indian Ocean on the south and the Java Sea on the north. With a population of over 141 million Java constitutes 56.7 percent of the Indonesian population and is the world’s most-populous island. The Indonesian capital city, Jakarta, is on its north-western coast. Much of the well-known part of Indonesian history took place on Java. It was the centre of powerful Hindu-Buddhist empires, the Islamic sultanates, and the core of the colonial Dutch East Indies. 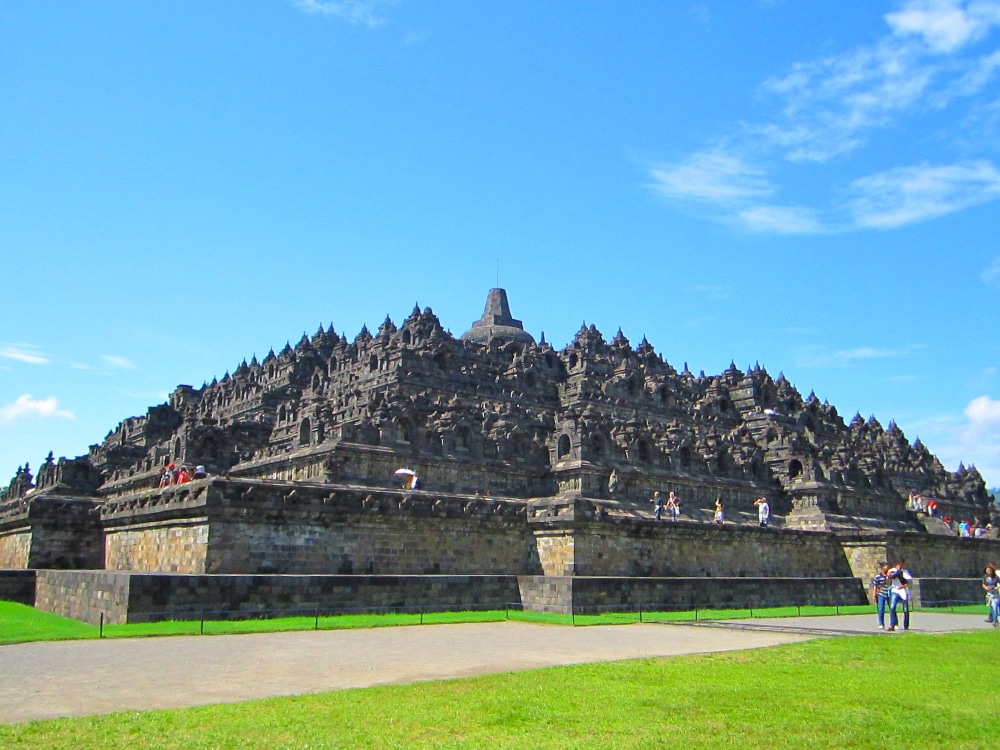 With one of Southeast Asia’s busiest metropolises with delirious nightlife to the peak of volcanoes, many of which are still very evidently active, which the fertile slopes are dotted with glimmering rice fields and small villages. Java is the heartland of Indonesia. Java has 121 active volcanoes plus a host of major national parks. So, together with its natural beauty and rich cultural history, Java has lots to offer the visitor.

Java is divided into three distinct regions: Western Java, Central Java and Eastern Java. Not very creative, for sure, but certainly plain enough to easily understand.

How to get there and around

Ferries connect the island with both Bali and Sumatra, plus there are a couple of ferry companies which connect with different islands.

Getting around Java is relatively easy.  There is a good bus work and great train network servicing most of the important cities on the island.  I wouldn’t recommend driving yourself as the locals driving habits can be erratic and those pesky motorcyclists don’t seem to recognise any road rules.

Jakarta – the nation’s capital, a city that is sinking due to the overuse of groundwater. A big, bustling, polluted place that contains some of Indonesia’s great monuments, lovely preserved historic buildings, the delightful waterside area of Ancol, huge shopping malls and a dazzling nightclub scene.

Surabaya – Indonesia’s second-biggest city that is all about business, but has some pretty tree-lined avenues, some impressive colonial buildings, and some great local arts.

Yogyakarta – One of Indonesia’s oldest cities it is a city that is filled with many heritage buildings and monuments. Popular with tourists because of the city’s proximity to the heritage sites of Borobudur and Prambanan.

Bandung – the capital of West Java and Indonesia’s third largest city.  Also called the Flower City, because of its gardens, Bandung is in the mountains, just 153 kms from Jakarta so best to avoid on weekends and public holidays when you won’t be able to move in the place.

The centre of Jakarta and it is impressive.  See the National Monument, a soaring tower, which was built to symbolize the fight for Indonesia and constructed under direction of President Sukarno. Also visit the National Museum of Indonesia which is a very good archeological, historical, ethnological, and geographical museum. Jakarta’s national museum is well known as Elephant Building because of the elephant statue there.

Admire the waterfalls of Purwokerto

Located in Central Java, near the town are some outstanding waterfalls. Cipendok is 92 metres high and a popular place for locals. The Gomblang waterfall is actually a double waterfall that has a massive amount of water go over them and Belot waterfall is popular because it has a path to a rock located right next to the fall that people leap from into a deep waterhole.

Walk the hills of Dieng Plateau

The Dieng Plateau is a huge plain with spectacular views. In addition, it is home to some of the oldest Hindu architecture in Java. More than 400 temples are spread over the region at an altitude of more than 2,000 meters, dating from the 8th and 9th centuries. It is a huge plain where you will see volcanoes, lakes and terraced gardens gracing the slopes. Spectacular to get up early and view at sunrise.

Be stunned by Borobudur Temple

Located on the island of Java, the magnificent Borobudur temple is the world’s biggest Buddhist monument, an ancient site widely considered to be one of the world’s seven wonders. The temple consists of nine stacked platforms, six square and three circular, topped by a central dome.  A marvel of design, the monument is decorated with 2,672 relief panels and 504 Buddha statues. The architecture and stonework of this temple has no equal. And it was built without using any kind of cement or mortar. The temple has remained strong even through ten centuries of neglect. It was rediscovered in 1815, buried under volcanic ash. The restoration took eight years to complete and today Borobudur is one of Indonesia and the world’s most valuable treasures.

Mount Bromo, which stands tall at 2329 m, is the most iconic and the most hiked mountain in Indonesia.  Many people start the trek up Mt Bromo, on Java, at about 2 am so they can be on the summit to witness the incredible sunrise. Mount Bromo is still one of the most active volcanoes in the world, and some areas are blocked off from tourists due to its imminent danger. Mt Bromo is located inside the massive Tengger caldera ( a volcanic crater with a diameter approximately 10km). This is surrounded by a sea of fine volcanic sand.