You’re in Darwin on holiday, you want to see a lot more of the Northern Territory, but there’s a mileage limit on the rental car, so could this be a problem?  Not really, as there are plenty of organised tours from which to choose.

I decided on the AAT Kings One Day Edith Falls and Katherine Gorge Tour as it offered great value, and promised to show me a part of the world that I had been keen to experience for quite some time. 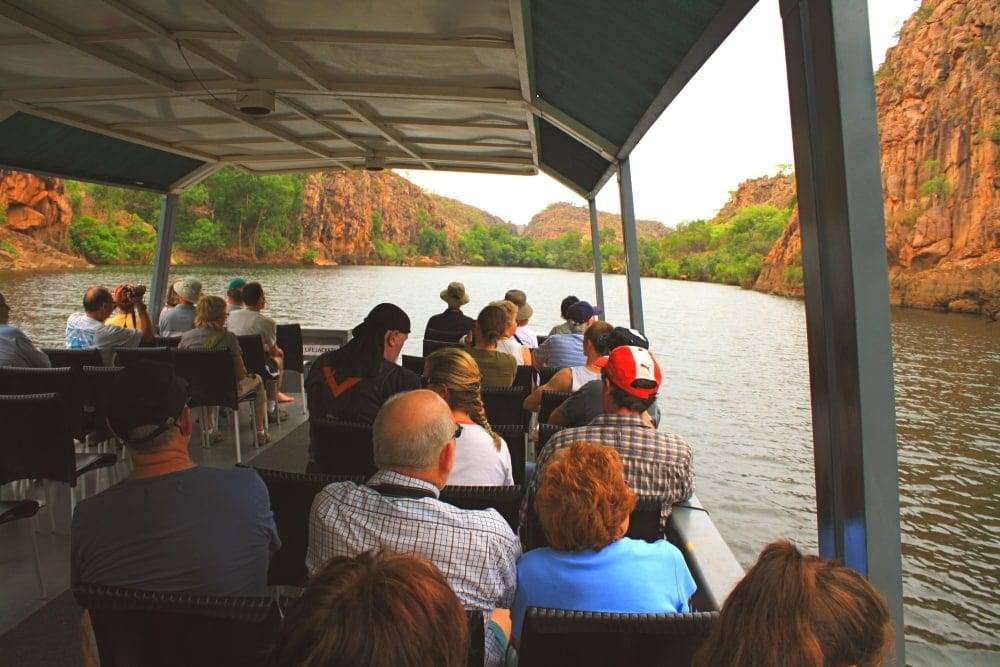 If I had of chosen to do this drive myself, I would have been seriously exhausted at the end of the day, but by choosing an organised tour, my total responsibility was to relax and to enjoy myself.

The highlight of this tour was the 2-hour Katherine Gorge Cruise, which easily surpassed my expectations.

The Katherine River winds itself through 12 kilometres of gorges, some of which have walls rising to a height of 70 metres, and it is an outstanding place.

We boarded a flat-bottom boat, which was open-sided for perfect viewing, and cruised deeper into the gorge system.

The Katherine Gorge was formed about 23 million years ago.  The Gorge consists of thirteen gorges, with rapids and falls, which follow the Katherine River, which begins in Kakadu.

The colours of the rocks change throughout the day, and the river banks are covered in lush greenery which grows out of ochre-coloured sand, upon which the freshwater crocodiles lay their eggs.

After travelling through the first gorge, we came to a natural rock barrier, through which the vessel could not pass.  This meant that we had to negotiate a 400 metre walk to another gorge, where a new boat awaited us.

The second boat took us to the most picturesque part of the gorge.  It was long and straight, and very impressive as the walls of the gorge towered over us.   We ventured right through this gargantuan corridor until we reached another rock barrier, we were turned back as the waters above this impediment were too shallow to negotiate at this time of the year.

During the wet season, these waters flow at a level up to 12 metres above our heads.  The water at this time is so abundant that what is normally a three hour tour in the dry season can be completed in just 45 minutes during the wet when there is nothing to impinge the boat’s progress.

Katherine Gorge is 340 kilometres south of Darwin, and the tour also stops at Adelaide River, for refreshments at the local pub, where the star attraction is a stuffed water buffalo that was hypnotised by Crocodile Dundee in the original movie.

A more sobering sojourn is a visit to the Adelaide River War Cemetery, which contains the remains of many of those who were killed in the bombing of Darwin during World War II.  This is a place for reflection and contemplation as we remembered those military personnel and civilians who lost their lives in those attacks.

Another highlight of the trip was a stop in Nitmiluk National Park at Leliyn, or Edith Falls as it is also known, where you can cool off and enjoy a swim in a huge, natural rock pool.

The AAT Kings driver, coach and organisation were all exceptional, and I would certainly travel with them again.

Disclosure: This was a private trip undertaken by the writer