I had the great pleasure to ride on one of Tokyo’s last remaining tram lines, the Toden Arakawa Tramway.

Public transport is a necessity in Tokyo, and the city is fortunate to have an excellent rail and bus service.

Apparently, Tokyo used also to have a good tram network.  Sadly, most of those have now disappeared, but the Toden Arakawa Tramway is still going strong. 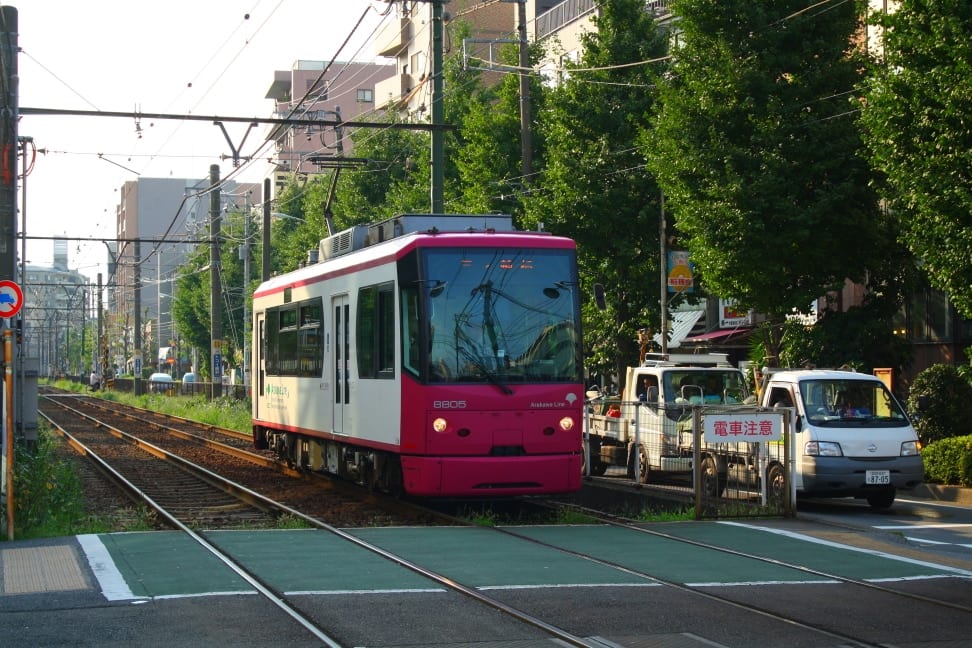 The local name for the trams is chin chin densha, and I was lucky enough to be riding in an older model carriage, which gave me a sense of history.

Being a lover of trams, and, also, someone who when travelling likes to get out and about in non-touristy area, I took the trouble to find the tramway and enjoy a very pleasant ride.

The tramway actually runs through the northern and eastern suburbs of Tokyo.

It is strictly a local tram service, which was part of its appeal to me, as I didn’t really want to ride a service that catered mainly for tourists.

The entire length of the track is just over 12 kilometres, and it runs from Minowabashi to Waseda.

I had a rail pass, which included travel on the tram, so rode the tram from Machiya-Ekimae to Otsuka-Ekimae, a distance of about seven kilometres.

Upon exiting Machiya railway station I had no trouble finding the tram stop, so stopped to take some photos before boarding my tram.

Although the tramway does cross many roads, for most of its journey it occupies a separate tramline which travels between buildings.  There is one section where it enters a main road, and follows a course up the centre of the road, negotiating a reasonably steep hill on the way.

The tram that I boarded was barely occupied, and so I did manage to get a seat up the back of the carriage so that I had a great view of the route we were taking.

Although the Japanese are very polite people, I could see some were taken aback to see a westerner on their local tram.  I am sure that it is not usual to share the tram with occidentals, and I was the only westerner that I saw, anywhere, during the whole trip.

Apart from the thrill of riding a tram, I was most intrigued by the areas we were traversing.

This was the true Tokyo, the one which locals know so well.

It was a great joy to see a Tokyo that was so suburban, and I really enjoyed watching the locals go about their normal business.

Trams move at a reasonable space, and this one seemed to stop every several hundred metres or so, which gave me plenty of time, and opportunity, to rubber neck the local communities, and to gain an appreciation for a slice of Tokyo life which seemed to be less frantic than that which I had witnessed at Shinagawa Station, near where I was staying.

All too soon we reached Otsuka-Ekimae, where I paused to take more photos, and to enjoy the sight of those trams rattling off into the distance.

A few minutes later I was back on the train to busy Shinagawa.

A day later and I was on the Shinkansen, the Bullet Train, racing across the countryside at over 300 kmh, thinking that somehow, between the Token Arakawa Tramway and the Shinkansen I had somehow lost a century.

Then I discovered that the Shinkansen is actually older than the tramway, which was re-opened in 1974, and that’s when I gained a deeper respect for the Japanese sense of tradition.

Ride it yourself HERE

The Philippines working on travel bubble arrangements with…