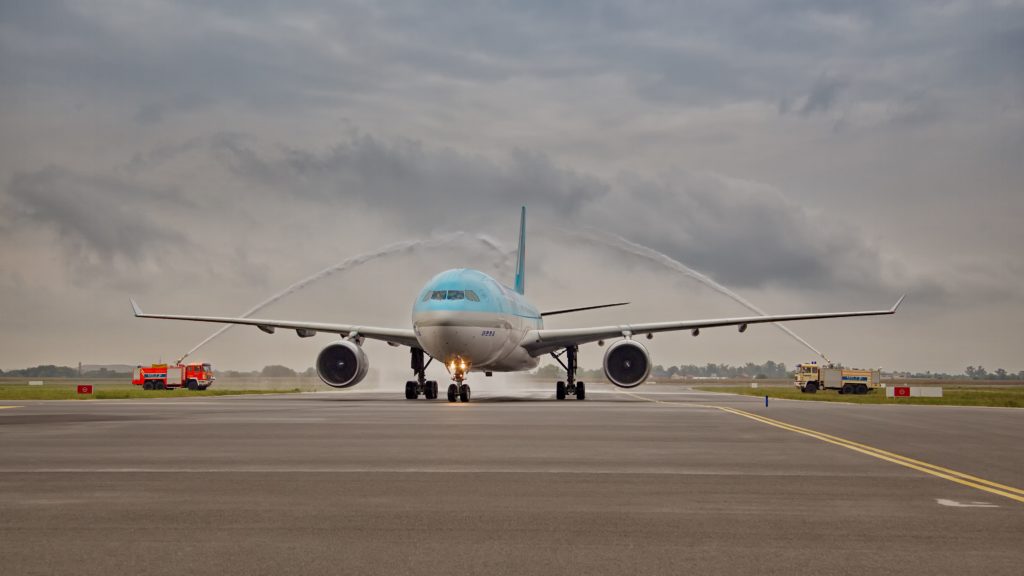 Korean Air commenced the three-times weekly non-stop service between Incheon and Zagreb, utilising Airbus A330-200 aircraft. The flight departs Incheon, Seoul at 1100, arriving in Zagreb at 1545. It then departs Zagreb at 1720, arriving back in Incheon at 1130 the next day.

The airline’s new service provides a convenient schedule for travel between Seoul and Zagreb. Those passengers arriving in Seoul and wishing to travel onwards enjoy easy connections at Incheon International Airport, with access to a wide range of destinations in Asia and Oceania for both business and leisure travel.

The airline’s maiden flight KE919 from Seoul, which took 11 hours and 40 minutes, was welcomed with a water cannon salute upon landing at Zagreb (Franjo Tuđman) International Airport on Saturday.

“Croatia – the fast-growing country in tourism in South East Europe”

Byung-Ryool Park, Korean Air’s managing vice president for Europe, said: “We are delighted to launch our first regular service to Croatia, the fast-growing country in tourism in South East Europe. Taking this opportunity, Korean Air will support in reinforcing trade and tourism relations between Croatia and Korea.”

Jacques Feron, said: “We are extremely proud that our efforts in connecting Zagreb with Asia all year round and in continually enriching the overall offer of flights show results.

“Almost half a million South Korean tourists visited Croatia last year and therefore we believe that this line will strongly contribute to the continued positive results recorded at Franjo Tuđman Airport, as well to the tourist results and the image of Zagreb.”

With the addition of the new route, Korean Air will operate international flights to 112 cities in 43 countries.

Korean Air is retiring all Airbus A380s and Boeing 747-8s