Top five European cities where it rains the most! 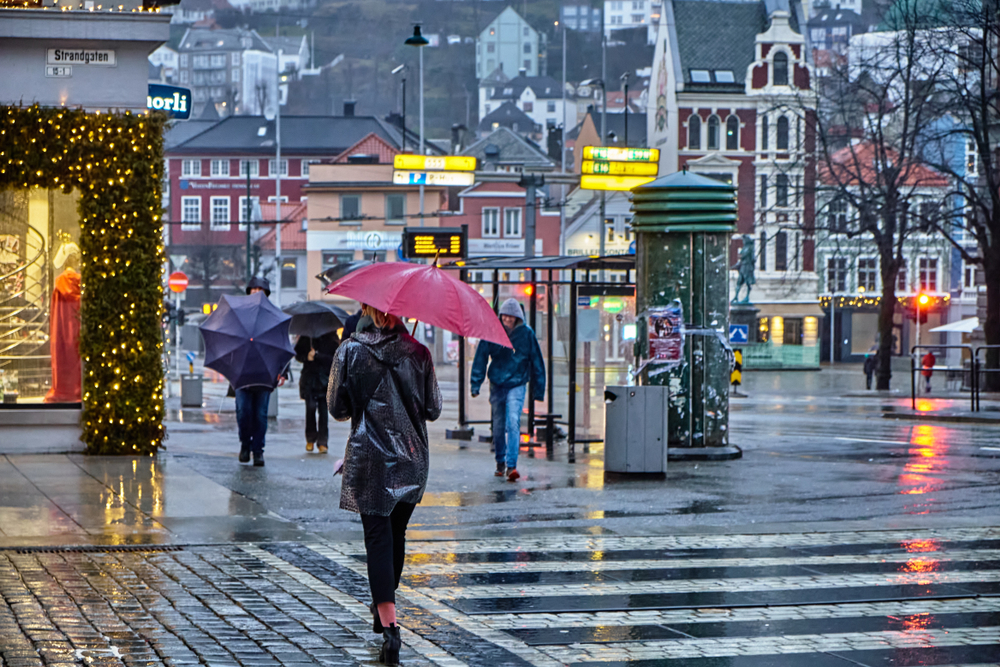 Holidu, the booking portal for holiday rentals decided to seek out the cities where it rains the most! Using data from World Weather Online, the cities were ranked based on their average number of rainy days per month as well as the average daily rainfall stats. Read on to discover which cities make it into the top ten and  recommendation of when to plan your trip to best avoid the heavy showers.

The generous amount of rain that these places receive does wonders for how these cities look. Lush, green landscapes await you!

1) Bergen, Norway
Securing the number one spot as the rainiest city in Europe is Bergen in Norway! Topping the data table for being both the city with the highest average rain days per month (12.7) as well as the highest average daily rainfall (8.8mm), Bergen is the outright rainiest city in Europe. But don’t let this put you off! Located on the southwestern coast of the country, Bergen is nestled among lush green mountains and impressive fjords, making it an ideal location for lovers of the outdoors.

2) Sunderland, UK
The second rainiest city in Europe is the British city of Sunderland. The port city is located in northeast England directly on the North Sea. Sunderland has relatively high rainfall all year round, but especially in the winter months of December and January when the average is 15 rainy days per month. According to World Weather Online, the fewest rainy days occur in April (seven per month), so you might even be able to enjoy a day at the beach. If it does rain, you can pass the time in one of the museums, for example.

3) Glasgow, UK
Due to its northern location and proximity to the Atlantic Ocean, Glasgow has a maritime climate characterised by humidity and falling rainfall throughout the year. The most rain falls here in January and December (14 rainy days per month on average), and the least in April (eight rainy days). But Glasgow has plenty to offer even in bad weather. Why not visit an art museum or pass away the (rainy) time with a whisky tasting in a quaint distillery?

4) Brasov, Romania
In fourth place is Brasov, the quaint medieval city in the Transylvania region of Romania. Brasov sees an average of 8.4 days of rain and 4mm of daily rainfall each month of the year. The city is surrounded by the magnificent Carpathian Mountains, making it the perfect destination for city dwellers and nature lovers alike. A trip to Brasov would not be complete without paying a visit to Dracula’s Castle itself, otherwise known as Bran Castle. The castle lies just a short 30 minute drive from the city and is a gothic wonder that can be admired come rain or shine!

5) Augsburg, Germany
The fifth rainiest city in Europe is officially revealed as the German city of Augsburg. Located in the south of the country, in the region of Bavaria, on average, rain falls here eight days a month with an average daily rainfall of 4.2 mm. But don’t let the rain stop you from visiting the small but beautiful town. The old town is worth a visit and a break from sightseeing in a café with coffee and cake is especially cosy in the rain. Those who are particularly rain-shy should visit in November, when the risk of precipitation is lowest.

Corendon Airlines adds extra routes due to success of 50% campaign