What is the most visited city in the UK? Which is the cheapest one? How do the British travel within their own country? The team from InsightsX, the business intelligence tool provided by TravelgateX for the tourism market, has taken a full x-ray of the travel sector in the UK.

More than 200,000 reservations managed through TravelgateX form the basis for the analysis.

66.5% of those reservations still had London as their destination, but they were closely followed by the city of Edinburgh, the Scottish Highlands, Manchester and Glasgow.

The capital remains not only the most visited city in the UK but also where travellers stay the longest (on average 3.2 nights). It is also the most expensive destination by the ‘price per night’ for a room (EUR 161 or USD 178). On the other end of the scale, it was found that Birmingham is the cheapest destination with a nightly price per room of EUR 82.3. 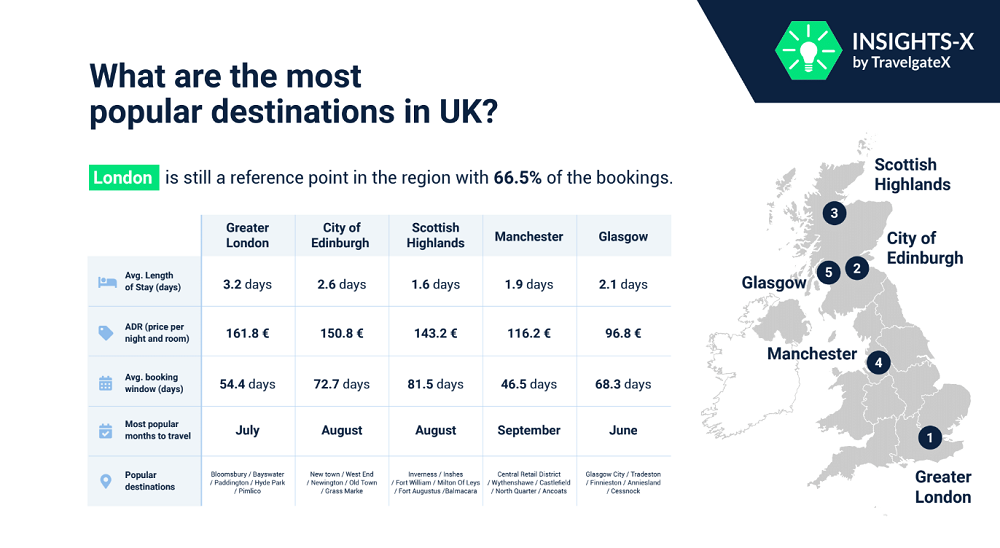 The most striking data that was extracted by InsightsX for the annual report on the UK market was how dependent the tourism sector was on summer seasonality: June, July and August are the preferred months to travel, both for locals and travellers from other countries. More specifically, July and August account for 23% of the reservations made this year.

The months of November and December have the fewest numbers registered, but it is interesting to see that reservations made for these final months of the year are the longest ones (3.61 nights on average).

TravelgateX, located in Parc Bit, Palma de Mallorca, is an international company that develops technology for tourism connections within the travel industry.

The Potential Rise of Fake Reviews in the Travel Industry

Top six things to do in Leeds this year