Gianni Versace, one of the most iconic fashion designers of all-time, once lived in a lavish mansion in Ocean Drive. It’s a premier property in South Beach – a picture-perfect town known for its vigorous beach vibe, Art Deco buildings, trendy nightspots, and celebrity-chef eateries.

But two decades after the revered designer’s death, the ultra-plush home is now a luxury boutique hotel called The Villa Casa Casuarina.

Follow the timeline below on how Versace’s former property has evolved.

The mansion was built in 1930 by Alden Freeman, a young architect, and heir to the Standard Oil fortune. He retired at the age of 27 and followed his passion to travel the world.

On one of his many trips, he came upon Alcázar de Colón in the Dominican Republic. It’s a 16th-century palace that served as the centre of the Spanish court for more than 60 years. He was so inspired by the structure that he decided to build himself a mansion that would pay tribute to its sheer magnificence.

But after seven years, Alden Freeman died and the house was sold to Jacque Amsterdam for USD$ 100,000. Amsterdam continued to run the house as an apartment complex and named it Amsterdam Palace.

In the years to come, the apartment complex passed through the hands of several owners and hundreds of tenants. And for a short time in the 1980’s, the property was called Christopher Columbus Apartments.

While on vacation, Gianni Versace was walking down Ocean Drive and was immediately fascinated by the mansion. His love for Spanish architecture and obsession with Greek and Roman mythology led him to purchase the property for USD$ 2.95 million.

He later invested USD$ 32 mn more in renovations in which he added the south wing, the pool, multiple gardens, and converted the 24 apartments into 10 large suites. 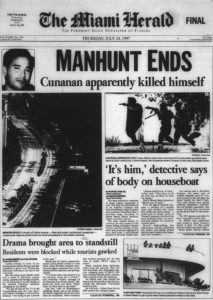 On the 15th of July 1997, Gianni Versace was shot and killed at the age of 50 on the steps of his mansion as he returned from a morning walk on Ocean Drive. Usually, Versace would have an assistant during his walks to get his morning papers, but on this fateful day, he decided to go by himself.

He was murdered by spree killer Andrew Cunanan, who used the same gun to commit suicide on a houseboat eight days later. Versace was Cunanan’s fifth and final victim.

A court-ordered bankruptcy sale resulted in a high-profile auction of the estate in 2013. It was a private bidding, which started at USD$ 25 mn and was raised in USD$ 500,000 increments.

Among the top bidders were Donald Trump, who sent his son Eric to bid on the property on his behalf, and New York’s Nakash and Gindi families, who happens to own Hotel Victor next door.

Trump and Victor Hotels Management, a group that specializes in operating boutique hotels in South Beach, were left to battle for the renowned estate. The latter won the auction and purchased the property for USD$ 42.5 mn.

At a news conference later, the group announced that it wants to operate a boutique hotel using the world-famous Versace name.

The mansion, now known as The Villa Casa Casuarina, offers a variety of luxurious suites.

The Azure Suite, The Aviary Suite, The Medalion Suite, The Garden Suite, The Signature Suite, The Venus Suite where his sister Donatella Versace stayed, and above all, The Villa Suite, which is the master bedroom where the late fashion designer used to stay.

Each of these suites has custom double king-sized beds, Italian marble bathrooms with gold fixtures and two shower heads, large closets, and its own separate living rooms and patios. You’ll also find his favourite art pieces inside the residence, which Versace commissioned for the property.

Outside the residence, you’ll find a 54-foot long pool lined with more than a million mosaic tiles, many of them in 24-karat gold. The pool showcases the largest image of Versace’s Medusa logo and is surrounded by hand-painted murals and ornate statues.

There’s also a restaurant called Gianni’s at the Villa, where they offer the finest Italian and Mediterranean cuisine by Chef Thomas Stewart. Reservations are required for dinner, but guests can walk into the bar for some drinks.

See the gallery below for photos of their exclusive suites.

For more information, you can visit The Villa Casa Casuarina’s official website at http://vmmiamibeach.com/.