14 months ago, during the Navidad semano (Christmas week) whilst the Covid-19 pandemic was silently creeping its assault around the world, I was fortunate to visit the world’s oldest restaurant in Madrid, while on a holiday to Spain. 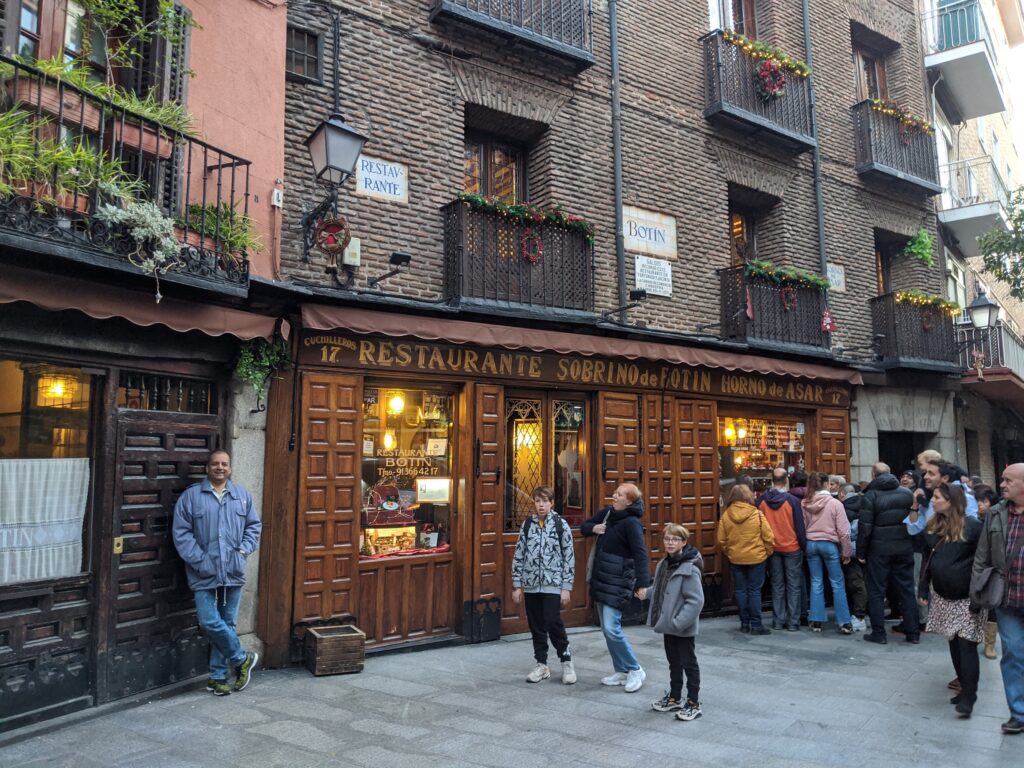 Situated in the medieval Austrias area of Madrid, the 295-year-old Botín restaurant was founded by Jean Botín in 1725 and has been in the González family since 1930, now for four generations. The restaurant has been visited by people from all over the world, including royalty, politicians, writers, and Hollywood stars, and features in the Guinness book of records as the oldest restaurant in the world.

Though the wine cellar originated in 1590, the restaurant above the cellar was founded as ‘Casa Botin’ by a French Chef, Jean Botin in 1725, who moved to Spain and married an Asturian lady. As they did not have children, Mrs. Botin’s nephews took over after Jean Botin and hence the name you see even today, splayed across the external façade: “Restaurante Sobrino de Botin Horno de Asar” which may be translated as ‘Restaurant Botin’s Nephews – Roasting Oven.’ Interestingly, the restaurant has kept the said oven’s flame burning continuously, never to be extinguished.

2015 apparently was Botin restaurant’s best year on record with an average footfall of 600 guests per day. At an APC (F&B combined) of €72 that works out to a very decent annual turnover of € 15-16 million (equivalent to INR130 crores). Note that the restaurant menu is not at all highly-priced… something they have kept as part of their business strategy through all the years.

We were unable to get a reservation online though I kept trying for nearly a month prior to the trip. However, when I visited the restaurant personally, I was able to get a booking, albeit for 2300h the subsequent evening, Sunday. Well, who were we to grumble at the reservation time, as the local “Madrileños” begin their evening dinners only post 2100h? Besides, who would want to miss out on eating in this iconic restaurant?

After a long day of touring, at 2000h, we decided to take a chance and check if the Botin Restaurant would accept us as early diners. We honestly expected the service team to be ‘hoity-toity’ about their reputation, and that they would expect their guests to grovel for a table; especially if they landed up 3 hours early… after all we were so fortunate to be dining in a piece of history, right?

Fortuitously, we were met by the same waiter who had taken our reservation the previous day and he was kind enough to check his register and then check with the restaurant manager, Luís Javier Sánchez Alvarez, who has worked at the restaurant for 41 years. Alvarez was very convivial and welcoming – he immediately asked the host to accommodate us… so up we followed him to their second floor, thoroughly elated at not just being able to dine early, but also at the warm reception. (Something we had honestly never expected!)

The restaurant has four floors, which maintain the quaint atmosphere of a traditional tavern. Alvarez the manager, explains why the Horno de Asar, the restaurant’s famous oven’s fire has never been extinguished. “It is our jewel. Our crown jewel. The oven has been burning continuously for 295 years,” he says. “We never put it out. It needs to be kept hot at night and be ready to roast in the morning. That’s the reason why we must never put it out. There is a special aroma in there; it’s truly incredible.”

Our meal consisted of Restaurant Botin’s famous specialties Cochinillo Asado (roast suckling pig) and Sopa de Ajo (an egg, poached in chicken broth, and laced with sherry and garlic) and these were truly delicious and certainly stood up for their reputation!

Our experience was truly delightful right from entry to exit that evening and it set me thinking as to what makes a restaurant succeed for three centuries altogether?

Giving importance to their local guests who make up 55% of their clientele and keeping their rates fairly reasonable is part of their business strategy; and while their cuisine is delectable, the ambience outstanding and so steeped in tradition and culture, what also stands out is the warm caring service we experienced – right from the manager to the steward – who in spite of servicing over 600 guests that Sunday evening still made us feel special by heeding to our request for an earlier table reservation and thereafter serving us with the same élan or elegancia we noticed around other tables… it seems they have been living and breathing their ethos to posterity… hence the centuries of successful evolution, whilst yet maintaining traditiciones from the past three centuria!

Park Hyatt Jakarta Opens In The Heart Of Menteng

MICE: When 12 heads are better than one